THE BIRMINGHAM PUB BOMBINGS INQUEST (1974): THE EVIDENCE OF CHRIS MULLIN

KRW LAW LLP represent ten of the families of victims of the Birmingham Pub Bombings 1974 in the resumed inquest into the deaths of their loved ones.   Following the evidence of former IRA Director of Intelligence Kieran Conway and from former IRA member Witness O, Chris Mullin was examined by barrister Leslie Thomas QC […]

THE BIRMINGHAM PUB BOMBINGS INQUEST (1974): THE EVIDENCE OF WITNESS O

THE BIRMINGHAM PUB BOMBINGS INQUEST (1974): THE EVIDENCE OF KIERAN CONWAY

KRW LAW LLP represent ten of the families of victims of the Birmingham Pub Bombings 1974 in the resumed inquests into the deaths of their loved ones.   Today our clients heard the Director of Intelligence for the IRA at the time of the bombings, Kieran Conway, admitting from a live video link from Ireland, […] 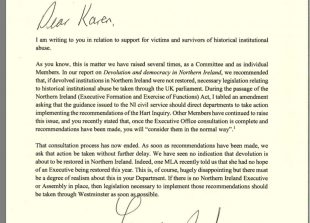 KRW LAW LLP welcomes the intervention of the Westminster Northern Ireland Affairs Committee (NIAC) in its urging of the Secretary of State for Northern Ireland to bring forward legislation to implement the Recommendations of the Historical Institutional Abuse Inquiry (HIA). The HIA Recommendations have been the subject of Consultation, which has now concluded. Draft legislation […]

KRW LAW LLP is instructed on behalf of the family of John Patrick Cunningham. John Patrick Cunningham (27) was shot by the British Army on 15thJune 1974 at Carrickness, Benburb, Northern Ireland  at the height of the Conflict.   Dennis Hutching was a serving soldier with the Life Guards Regiment. Two charges of attempted murder […]

TO ALL VICTIMS AND SURVIVORS OF ABUSE IN STATE RUN INSTITUTIONS, TRAINING SCHOOL AND ‘CARE’ HOMES and HOSTELS

Today, Kevin Winters, of KRW LAW LLP invites all victims and survivors of institutional abuse suffered in state run institutions including Training Schools and Care Homes to attend an important at our offices in Belfast (9 -15 Queen Street) tomorrow (7thMarch 2019) at 12:00pm.   Marty Adams of Survivors Together said:   “I would encourage […]