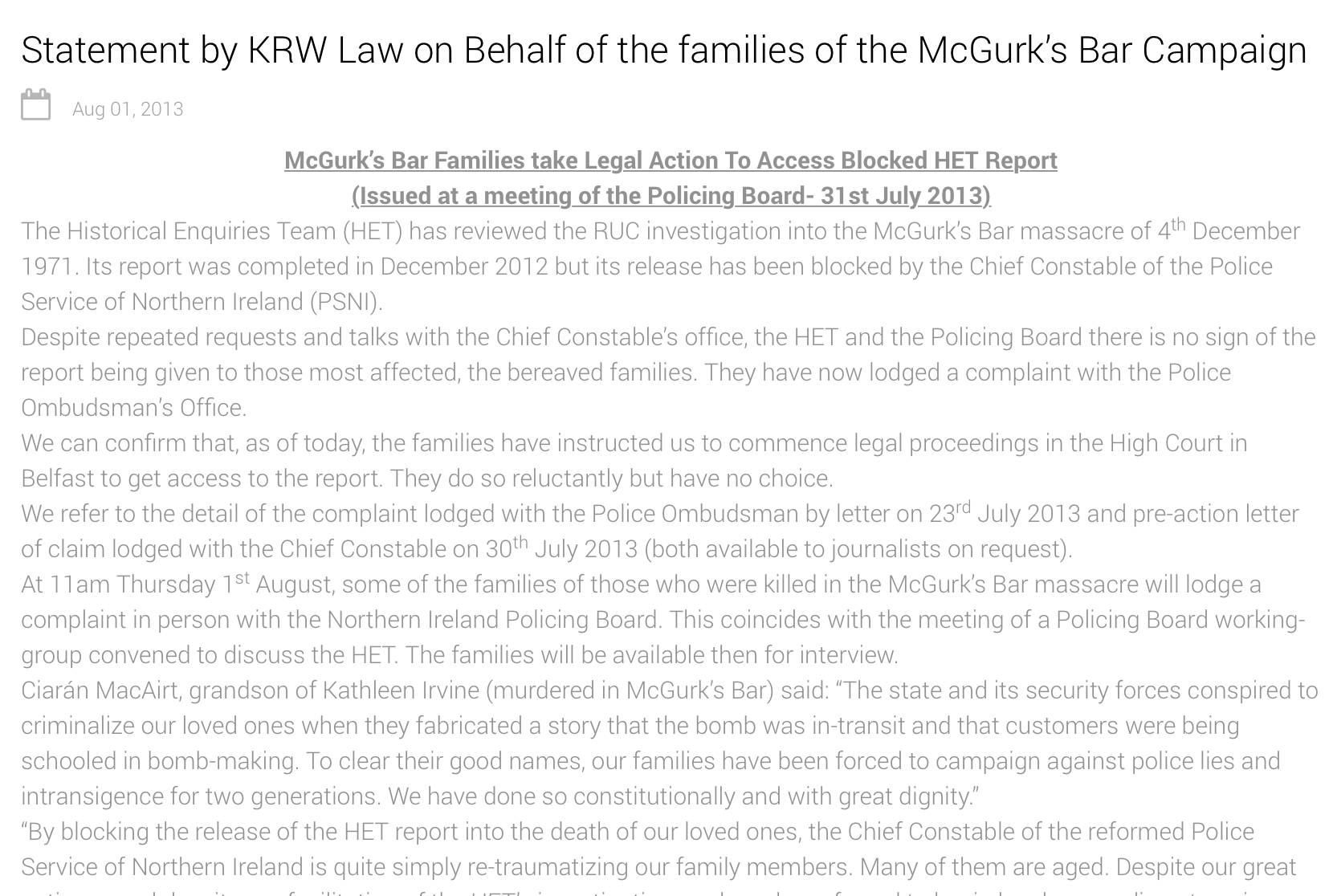 The Historical Enquiries Team (HET) has reviewed the RUC investigation into the McGurk’s Bar massacre of 4th December 1971. Its report was completed in December 2012 but its release has been blocked by the Chief Constable of the Police Service of Northern Ireland (PSNI).

Despite repeated requests and talks with the Chief Constable’s office, the HET and the Policing Board there is no sign of the report being given to those most affected, the bereaved families. They have now lodged a complaint with the Police Ombudsman’s Office.

We can confirm that, as of today, the families have instructed us to commence legal proceedings in the High Court in Belfast to get access to the report. They do so reluctantly but have no choice.

We refer to the detail of the complaint lodged with the Police Ombudsman by letter on 23rd July 2013 and pre-action letter of claim lodged with the Chief Constable on 30th July 2013 (both available to journalists on request).

At 11am Thursday 1st August, some of the families of those who were killed in the McGurk’s Bar massacre will lodge a complaint in person with the Northern Ireland Policing Board. This coincides with the meeting of a Policing Board working-group convened to discuss the HET. The families will be available then for interview.

Ciarán MacAirt, grandson of Kathleen Irvine (murdered in McGurk’s Bar) said: “The state and its security forces conspired to criminalize our loved ones when they fabricated a story that the bomb was in-transit and that customers were being schooled in bomb-making. To clear their good names, our families have been forced to campaign against police lies and intransigence for two generations. We have done so constitutionally and with great dignity.”

“By blocking the release of the HET report into the death of our loved ones, the Chief Constable of the reformed Police Service of Northern Ireland is quite simply re-traumatizing our family members. Many of them are aged. Despite our great patience and despite our facilitation of the HET’s investigation, we have been forced to begin legal proceedings to gain access to this report. We have been forced to raise a complaint with the Police Ombudsman and with the Policing Board, set up as it is to hold the police to account. Our families have suffered enough.”