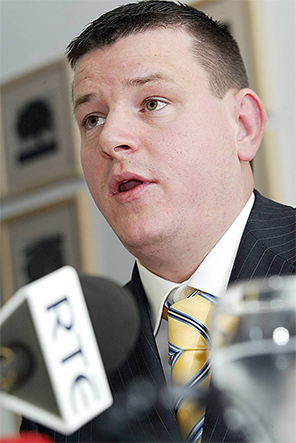 Niall was educated at St Mary’s CBGS in West Belfast later graduating from Queens University Belfast with a law degree in 1998.  From there Niall immediately commenced an apprenticeship at Madden and Finucane Solicitors, gaining crucial experience assisting preparation for the then upcoming Bloody Sunday Inquiry.  Niall was the first solicitor employed by Kevin Winters and Co in 2001, and became partner in 2003 at the age of 26.  Niall is married with three children.

Niall has a long and respected track record in criminal defence work, as part of the KRW Law criminal department.  Niall is a qualified Advanced Advocate since 2005.  Niall has conducted cases from the full range of criminal offences, included complex fraud investigations, armed robbery, rape and murder.

Malicious allegation of “depraved” sex attack on a woman after it emerged that the woman concerned had a history of self-harm.  3rd party disclosure application crucial to uncovering key evidence.  The trial Judge expressed his “sincere regret” that he had been detained for such a period of time “for a series of crimes that he did not commit”.

Chris Ward was the only man charged with the £26.5m Northern Bank robbery in December 2004, one of the largest cash robberies in world history.

Retrial and acquittal post successful Court of Appeal quashing conviction for the murder of two British soldiers in March 2009 in County Antrim.

Niall also represents many families bereaved as a result of state collusion with paramilitaries, including those bereaved at atrocities such as Loughinisland, Loughgall, Clonoe, McGurks Bar, Ormeau Road Bookmakers, amongst others.  Whereas civil proceedings are on-going on behalf of the relatives against various agencies of the State, Niall has also assisted the families in their campaigns to highlight the injustices that the individual circumstances of their cases present.

In March 2012, Niall attended at the United States Congress in Washington DC, with families representing the Loughinisland, Clonoe and Ormeau Road relatives, to lobby American politicians as the inability of the State to deal with the past here.

Niall is also instructed on behalf of several families to act at the reopening of the ‘John Stalker / Shoot to Kill’ Inquests , relating to the murders of 6 unarmed men in 1982 by the RUC.

In July 2012, Niall acted as Counsel to the Community Inquiry into the murder of Gerard Lawlor, on the 10th Anniversary of his death.  Gerard remains the last Catholic to be shot dead by loyalist paramilitaries in Ireland.  A report released in November 2012 found that found serious deficiencies in the various investigations that have taken place into the murder, which, in Independent Panel’s view, amounted to collusion.  They found that state agencies, including the PSNI and the Police Ombudsman had all failed so far to provide an effective investigation in accordance with Article 2 of the European Convention on Human Rights, which protects the right to life.

20th April 2013
Patron to the Irish Famine Tribunal which was convened at Fordham University in New York City. www.irishfaminetribunal.com

26th April  2013
Speaker at the CAJ Conference ‘Mapping the Rollback’  convened to consider the implementation of the Good Friday Agreement, 15 years on. Lecture presented on Emergency Law and Reform.

12th September 2013
Invited Speaker at the American University, Washington College of Law, Centre for Human Rights and Humanitarian Law, on the topic of  ‘Accountability and Transitional Justice in Ireland and the UK’s compliance with Article 2 of ECHR’. With Professor Diane Orentlicher, Professor of International Law at American University described by the Washington Diplomat as “one of the world’s leading authorities on human rights law and war crimes tribunals.”

13th September 2013
Submissions to Amnesty International which were reproduced in their report ‘Northern Ireland : Time to Deal with the Past’.

March 2014
‘Time for Truth : The conflict in Ireland and the British Governments compliance with Article 2’.            EU Center for Excellence at University of Pittsburgh Law School and also Seton Hall University Law School, Jersey City, to coincide with the 24th March as the UN International Day for the Right to the Truth concerning Gross Human Rights Violations and for the Dignity of Victims.

6th November 2014
Transitional Justice in the Context of European Convention Obligations: Article 2 and the Package of Measures Ulster Hall, Belfast

1st July 2015
Attended 114th Session of UN Human Rights Committee at Palais de Wilson Office of the High Commissioner for Human Rights in Geneva on behalf of Relatives for Justice to make submissions in respect of the 7th Periodic report on UK compliance with international human rights obligations.

8th October 2015
Honorary Chair to The Homecoming and Belfast One City Conference and Director of Legal Symposium held at the Inn of Court, Royal Courts of Justice.

12th February 2016
Lord Chief Justice Private Meeting with Families of Delayed Inquests
Appointed by Lord Chief Justice Sir Declan Morgan QC, to act as Rapporteur to private meeting called and organised by LCJ, with families and next of kin of those affected by delayed inquests, to articulate concerns and frustrations at the ongoing impasse.

12th April 2016
Human Rights Delegation to Strasbourg.
Public Sector Resources, the National Security excuse, the Legacy of the Conflict and the failure by the British Government to comply with ARTICLE 2.
Made submissions to Council of Europe Human Rights Commissioner and Department for the Execution of Judgments

17th May 2016
Repeal of the Human Rights Act: Implications for Northern Ireland

12-14th October 2016
Honorary Chair to The Belfast Homecoming and Conference and Director of Legal Symposium to be held at the Inn of Court, Royal Courts of Justice.
http://belfasthomecoming.com/wp-content/uploads/2016/09/LegalSymposium.pdf

‘The Role of the Solicitor at the Police Station’

Springhill Centre for Human Rights and Border Communities Against Brexit

Storytelling and Global Justice – The role of voice and truth telling in local and global Restorative and Transformative Justice.

Niall is a Director of Belfast based NGO Relatives for Justice who provide therapeutic care and legal advocacy to thousands of victims of the conflict in Ireland, particularly those affected by state violence. Niall has represented RFJ in delegations to the European Parliament in Brussels and to the office of the EU Human Rights Commissioner in Strasbourg. Niall was also part of the RFJ delegation who made a submission to the Haas – O’Sullivan team in December 2013.

Niall sits on the Board of West Belfast Theatre Company ‘Brassneck’ and has also acted as advisor and participant to TG4 show ‘Éagóir’ an Irish medium documentary series which examines Miscarriages of Justice.  A second series has recently been commissioned.

Niall is a member of the Development Panel to the Northern Ireland Human Rights Fund.

Niall is a keen Gael, serving as Chairperson of Gaelscoil Éanna (described by Iontaobhas na Gaelscolaíochta as the fastest growing Irish medium school in Ireland).  In 2004, with others he founded the first Irish medium nursery in the Newtownabbey Borough, which opened with 7 children. Gaelscoil Éanna followed in 2008, and in September 2012 welcomed over 100 pupils to a brand new school building, at a cost of £500,000.   Niall is currently Assistant Secretary to St Enda’s GAC who have recently developed two additional pitches, which means that in the past 18 months, he has assisted Glengormley Gaels in securing over £1 million of investment. Niall also won Ulster and All Ireland medals with Antrim junior hurlers in 2002.

BBC Spotlight: Silence of the Supergrass