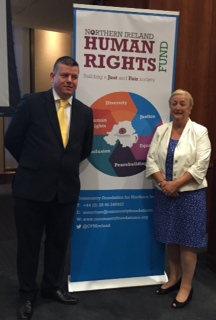 It is a great honour to be invited to address this launch of the Human Rights Fund.

The work of the fund in replacing the exceptional work undertaken by Atlantic Philanthropies to sustain our human rights architecture is a massive responsibility.

The most relevant question for you tonight as our guests is perhaps the direct one ‘Why fund Human Rights work in the north?’

All of this occurred in Western Europe.

The causes, features and responses to such a conflict are of abiding significance.

Allied with a culture of impunity together with the toleration of religious and other forms of discrimination, this created a potent hotbed for human rights abuses.

The exposure and holding to account of elements of the State for these crimes is so far an uncompleted task.

The need for a proactive and resourced human rights community has never been more compelling. Indeed the seriousness of the situation cannot be over-estimated. Dr Haass cautioned as to the real possibility of a return to violence if the issues are not resolved:

“Where politics is not shown to be making progress, alienation will continue to fester and violence, I fear, could very well re-emerge, as a characteristic of daily life, so it is premature to put NI, as much as we would like to, into the ‘outbox’ of problem solved. I would love for it to be there and I look forward to that day but quite honestly it is not there yet.”

Our cherished Good Friday Agreement is under attack by the current Tory Government administration who want to tear the soul from it, by abolishing the Human Rights Act. A piece of legislation whose relevance and enforceability is ironically the reason for its vulnerability and which is incorporated into the very fabric of the GFA. The political settlement guaranteed a place in governance for representatives of the two main traditions underpinned and guaranteed by an infrastructure of legislation and institutions designed to promote human rights and equality.

The Human Rights Act is the core legislative document from which all of our donor NGO’s practice, as they seek to promote the human rights culture envisioned by the GFA. It is worth a moment to reflect of on the historical context from which the HRA comes. It of course, integrates into British domestic law the ECHR, a document composed, ironically by British lawyers, to ensure that the worst vestiges of humanity, as witnessed in Europe in the late 1930’s and 1940’s. The rights enshrined in the ECHR also bear to be recalled, indeed in a celebrated speech by the late Lord Bingham in 2009, he listed the rights that the ECHR protects:

“Which of these rights, I ask, would we wish to discard? Are any of them trivial, superfluous, unnecessary? Are any them un-British?”

Yet it is these core principles which underpin the legality of our humanity which this present Government seeks to repeal, and in doing so, jeopardising our fragile peace.

Our peace process requires constant attention, vigilance and honest work. The donor grantees do that work on a daily basis and are in effect the watchdogs and guarantors of our peace process.

1 CAJ. Committee on the Administration for Justice.  The Committee on the Administration for Justice is perhaps the longest surviving and best known of the groups. Founded in 1981, CAJ takes no position on the constitutional status of the north and is firmly opposed to the use of violence for political ends. CAJ take no government funding whatsoever.

CAJ was created at the height of the conflict and has played a significant role in putting human rights at the heart of the peace settlement and has been occupied with making of a rights based society since.

CAJ’s role is to address directly the human rights issues that determine conflict or peace.

“CAJ focuses on key issues which determine whether Northern Ireland continues on a peaceful path or lapses back into widespread conflict.”

CAJ are concerned to combat impunity, guarantee non recurrence by working for contemporary accountability, promote a rights based framework for the exercise of the freedoms of expression and assembly and to promulgate generally the benefits of a rights based society.

I should also add that the reason I am so passionate about this fund is because as a lawyer working at the coal face of many of these issues in courts and detention centres is because invariably when incidents of intimidation of me and my partners occurs, it is to CAJ that we register our immediate complaints and concerns.

2 PPR The Participation and the Practice of Rights.  The core aim of the PPR Project is to support the most marginalised groups across a range of locations and themes to successfully use PPR’s participative human rights based approach to realise their social and economic rights and also to improve government decision making in line with human rights standards on participation, accountability and equality.

PPR seek to develop ability and capacity directly in communities to become proactively involved in human rights monitoring and campaigning on a range of social and economic themes, such as housing, health, employment, education and social security.

PPR is the organisation founded by the legend Inez McCormack and stands for the Participation and the Practice of Rights. I consider that is vision is best summarised in Inez’s own words when she said that PPR existed to

“Enable the powerless, the invisible, to be part of making change. That changes how they see themselves and that changes everything …”

Validation of the exceptional quality of the work that PPR do can be found in the words of the former President of Ireland and UN High Commissioner for Human Rights, Mary Robinson

“It’s the way human rights work should be done, but isn’t done”.

3 The Human Rights Consortium is the third of the groups to be supported by the fund. It is an alliance of almost 200 groups working to ensure a human rights based society including a strong and inclusive Bill of Rights, using the keys tools of advocacy, organisation, litigation and community building to promote social and economic rights.

The Consortium play a key role in ensuring participation at the grass roots level through its wide ranging network, and provides key training and resources in informing the debate and creating a forceful lobby. The Consortium commissions and undertakes ground breaking research which produces evidence to underpin campaigns and challenges threats such as that presently posed by the Tory Government.

4 The last group is the Public Interest Litigation Scheme. As a practicing lawyer I can speak directly to the crucial support that PILS provides to lawyers working to promote and validate the rights of the marginalised in court.

PILS is the use of litigation or legal action which seeks to advance the cause of minority or disadvantaged groups or individuals or which raises areas of broad concern. PILS is not a field of law but is an approach to the practice of law, using the law to create and sustain social change for the vulnerable and disadvantaged in society, deploying a strategic approach to ensure cases of precedent are taken in circumstances where they might not otherwise be. PILS work to find the best cases to take, and liaise closely with their Stakeholders, and I am proud to report that our practice KRW Law is a stakeholder in PILS and further that I am joined tonight by my colleague and partner Paul Pierce who sits as a member of the PILS Board of Management.

A key dynamic presented by PILS is the fact that they will support a key case or principle in circumstances whereby the State’s legal aid system refuses to provide such support. Indeed this dynamic is becoming more dangerous as in April 2015, the Legal Services Commission (which administers legal aid to those marginalized and vulnerable members of society) was stripped of its independence and brought within the confines of the Department of Justice which now means that for an individual to sue the state for a human rights abuse, it must apply to the state for security of costs to do so. That PILS exists means that there is a truly independent and autonomous body to fund cases that might not otherwise be taken.

Indeed the issue of resource is now a hotly contested legal and political issue. ‘Lack of resources’ are repeatedly held up as a mantra as to why Shoot to Kill Inquests can’t get started, why the Police Ombudsman can’t employ more investigators and why the legal aid system has been cut beyond recognition, yet the same State can afford to settle hearing loss claims for 10,807 retired police officers at a cost of over £120 million, and in a financial budgetary era where the Police Service recently returned £14 million in unspent funds.

The entire architecture of how the State discharges it’s article 2 ECHR responsibilities, article 2 being the most fundamental of rights, the Right to Life, is now being inextricably linked by the Tory Government to its economic austerity agenda. CAJ have described this recently as the Apparatus of Impunity.

The State’s obligations under article 2 are monitored by the Council of Ministers at Strasbourg and Britain proposes it’s discharge via a Package of Measures, which are then authorised and approved by Strasbourg. It signed off on the HET, Police Ombudsman and the Inquest system, and Britain has now proposed the Stormont House Agreement as the discharge of its responsibilities. However in doing so, on a political basis, the Tories have linked the setting up of the article 2 bodies, with harsh welfare cuts. Insisting that there can be no movement without £1.2 billion in cuts which will affect again the most marginalised and the most vulnerable in society. £1.2 billion represents 0.002% of the overall Westminster budget yet we are being made to in effect purchase our human rights. This is the agenda which must be resisted as Convention rights cannot be predicated on the decision to agree to implement the austerity agenda of an anti-human rights Tory Government.

This Human Rights Fund should be supported because of:

Our Peace Process is like a marriage, requiring constant vigilance, support and attention. CAJ’s critique of the GFA on the 15th Anniversary reflected that the commitments undertaken have suffered from a deliberate Roll Back. The work of these groups is never as important as now, and the words of Martin Luther King never having more resonance or applicability than when he stated in 1958 that:

“True Peace is not merely the absence of tension, it is the presence of Justice”

By supporting this Fund, you support our Peace through the promotion of Justice.