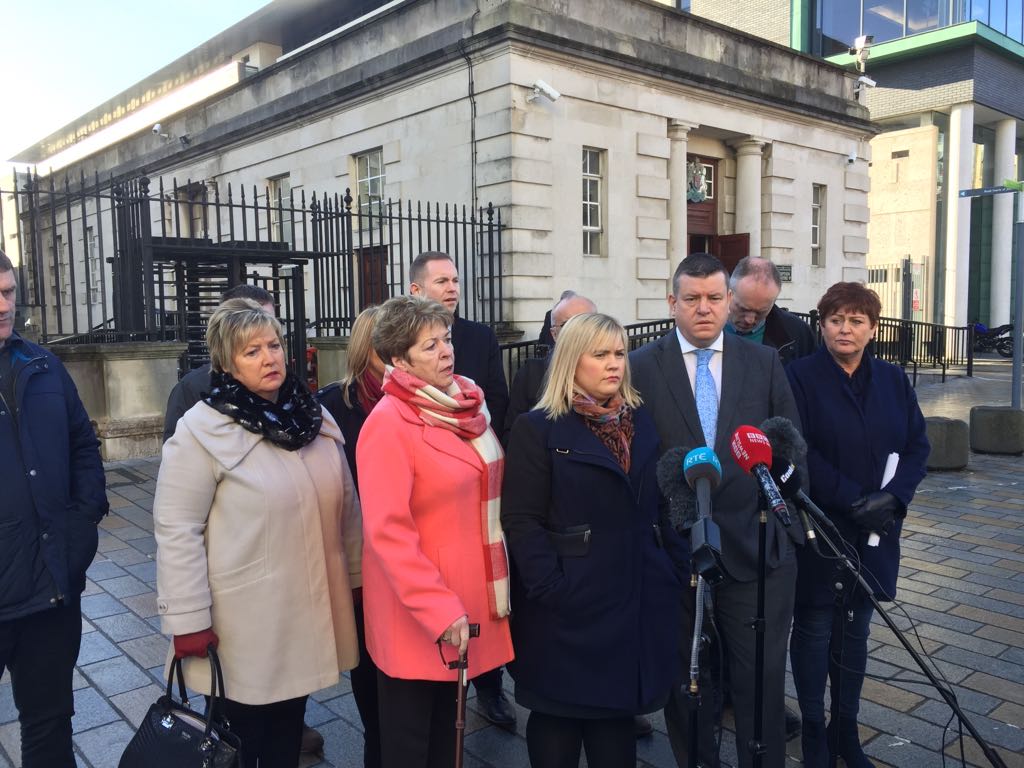 Emma Rogan, whose father Adrian was murdered in the Heights Bar:

“We respect the decision by the judge to step aside from this case today, and we look forward to fully embracing the opportunity to fully confront the procedural challenges raised by Ronnie Hawthorne and Raymond White. We welcome the fact that Dr Maguire’s Report of June 2016 remains legally intact.

All we ever wanted was the truth – that’s it bottom line.  Everybody deserves it, it’s human decency for people to know and for people to acknowledge what happened to their loved ones.

The families have full and absolute confidence in the integrity and function of the office of the Police Ombudsman.  We feel that it is important to publicly record that fact at this time.  We have been contacted by many other victims who are awaiting reports from the Police Ombudsman’s office, who are now left frustrated at the delay that Mr White and Mr Hawthorne’s challenge will now cause them.  We share the frustration and pain that these delays will cause other families awaiting reports, and fully empathise with their plight.

It is important that all victims support each other and take comfort from our shared experience and common goal, which is truth recovery, accountability and where possible, justice.”

Niall Murphy, solicitor for the families of those bereaved states:

The facts which inform the determination that Collusion was a significant feature in the Loughinisland murders still pertain. In fact they were never even challenged in this Judicial Review!

The facts therefore remain as facts.

None of these facts would have seen the light of day, but for the Police Ombudsman’s report, and the families are eternally grateful for the recovery of those facts.

There is a real onus on retired police officers to engage with the Ombudsman.  Issues have been identified in the facts of this challenge which reinforce this fact. The challenging officer, Ronnie Hawthorne, disputed the fact that he had done anything wrong when he authorised the destruction of the largest physical exhibit in the case, the getaway car which had been recovered intact, within 24 hours. But the real issue that needs to be resolved, is that the investigating officer, referred to as Police Officer 8, whom Ronnie Hawthorne alleges submitted the documentation, to him to sign the authorisation, refused the engage with the Ombudsman (see paragraph 65 of the Report). If there is a legislative defect in the Ombudsman’s statutory powers, then the immunity from investigation enjoyed by Retired Officers, is the defect that requires to be remedied.

BRITISH GOVERNMENT IN BREACH OF ARTICLE 2

The office of the Police Ombudsman and specifically the work of its Historic Directorate is held up by the British Government to the European Court of Human Rights in their defence, in respect of found failings in respect of the British Government’s breaches of article 2, the right to life. As such, this case will be required to be considered by the Council of Ministers in Strasbourg, and the State’s compliance with the European Convention on Human Rights, considered acutely in that regard.