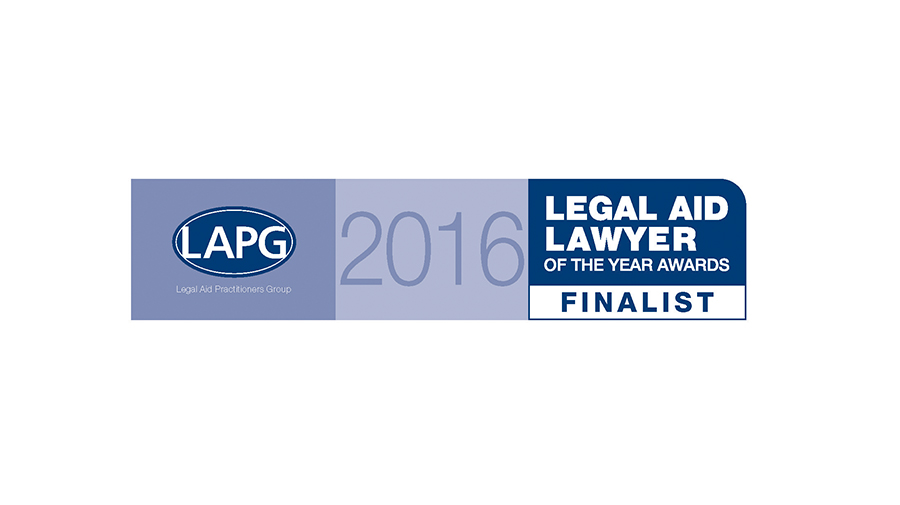 The barrister who will be the next director of Liberty; a carpenter-turned-housing-caseworker; and the solicitor who won an historic victory at the Supreme Court in the Jogee joint enterprise case, have all been selected as finalists in this year’s Legal Aid Lawyer of the Year (LALY) awards.

‘The range and quality of finalists this year illustrates not just the important legal aid work that is being done, but also the diversity of people who are drawn to this vital area of law.’

The LALYS, which are run on a not-for-profit basis by LAPG – were opened up to lawyers in Northern Ireland for the first time this year.

Belfast-based KRW Law has been shortlisted in two categories: Legal Aid Firm/Not for profit Agency; and Darragh Mackin, who qualified as a solicitor at the firm in 2014, is a finalist in the Legal Aid Newcomer category. The LALY judges were impressed with Darragh’s challenging caseload, handling high-profile criminal defence work, including murder and terror-related offences.

Martha Spurrier, of Doughty Street Chambers who takes over as director of Liberty in June, was shortlisted for Legal Aid Barrister of the Year, in recognition of her work for bereaved families, and challenging cuts to legal aid funding.

Simon Natas was shortlisted for Criminal Defence Lawyer of the Year, after his nomination was supported by the campaign group Joint Enterprise Not Guilty by Association. A string of appeals is expected to follow the Supreme Court’s ruling earlier this year that the courts had taken a wrong turn in relation to joint enterprise 32 years ago.

Finalists in the Social and Welfare law category include Lou Crisfield, who ran a furniture-making business before becoming a housing caseworker at Miles & Partners. Her clients included a disabled man living on the second floor, who had only left his flat twice in a year, both times having to be carried down by ambulance staff. With Lou’s help, he was rehoused in wheelchair-accessible accommodation.

The winners will be announced by Baroness Doreen Lawrence at a ceremony in central London on 7 July 2016.

The LALYs are organised by the Legal Aid Practitioners Group, and are into their 14th year.

4) Social and Welfare (Sponsored by Tikit)

The judges will also be making an award for Outstanding Achievement