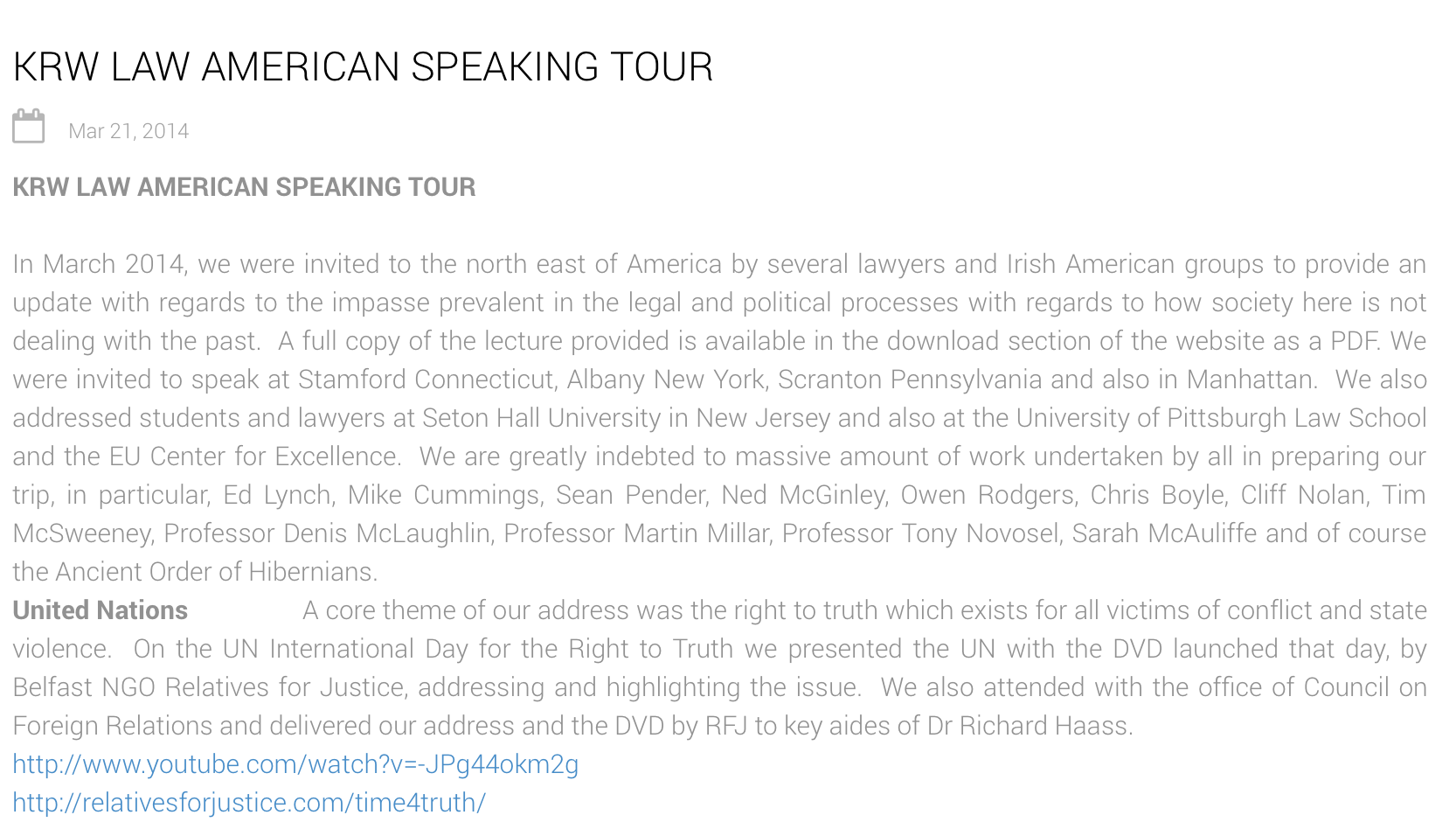 In March 2014, we were invited to the north east of America by several lawyers and Irish American groups to provide an update with regards to the impasse prevalent in the legal and political processes with regards to how society here is not dealing with the past.  A full copy of the lecture provided is available in the download section of the website as a PDF. We were invited to speak at Stamford Connecticut, Albany New York, Scranton Pennsylvania and also in Manhattan.  We also addressed students and lawyers at Seton Hall University in New Jersey and also at the University of Pittsburgh Law School and the EU Center for Excellence.  We are greatly indebted to massive amount of work undertaken by all in preparing our trip, in particular, Ed Lynch, Mike Cummings, Sean Pender, Ned McGinley, Owen Rodgers, Chris Boyle, Cliff Nolan, Tim McSweeney, Professor Denis McLaughlin, Professor Martin Millar, Professor Tony Novosel, Sarah McAuliffe and of course the Ancient Order of Hibernians.

United Nations                 A core theme of our address was the right to truth which exists for all victims of conflict and state violence.  On the UN International Day for the Right to Truth we presented the UN with the DVD launched that day, by Belfast NGO Relatives for Justice, addressing and highlighting the issue.  We also attended with the office of Council on Foreign Relations and delivered our address and the DVD by RFJ to key aides of Dr Richard Haass.

ALBANY               We were invited to address Senators and Congressmen from the New York State legislature, and were facilitated by Congressman Mike Cusack from Long Island and Senator Maziarz from Buffalo.   Both legislators later afforded the group with formal introductions to both Houses of the legislature, for which we are deeply honoured.

BLAIRSTOWN Blair Academy      We were invited to address the Society of Skeptics at Blair Academy in New Jersey.  The weekly Society of Skeptics series, which has been in continuous existence since 1977, is one of the premier high school lecture series in the United States. Previous speakers have included ANC leader Albie Sachs, Camobodian Killing Fields survivor, Dith Pran, Chilean human rights advocate Veronica De Negri and Ishmael Beah a former child soldier of Sierra Leone’s civil wars.  Kevin and Niall provided the gathering of 300 with an overview of the Irish conflict, the historic context of the deprivation of human rights, and the legacy that it provides for modern society.