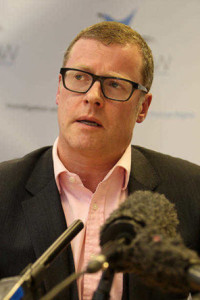 Kevin Winters was apprenticed to criminal defence and human rights lawyer Patrick Finucane at the time of his murder in 1989. On Pat’s death, Kevin went into partnership with Peter Madden and the late Eamann McMenamin. Kevin initially worked on the McCann and Others v UK shoot-to-kill ‘Death on the Rock’ inquests before the seminal case on the right to silence of Murray v UK.

His criminal defence litigation in the 1990s contributed to the greater protection of the rights of people detained under terrorism provisions. Having forged his reputation in fighting miscarriages of justice in cases including The Ballymurphy 7 and the Beechmount 5, he went on to co-found Kevin R Winters and Co in 2001 which in time has become the largest criminal law and human rights practice in Ireland.

The practice changed its name to KRW LAW LLP in 2012 and in each year of the past decade the firm as Kevin R Winters & Co and subsequently KRW Law has been included the widely regarded global Chambers and Partners Law Directory.  This is an affirmation of both the status and reputation of Kevin personally, and of the practice as one of the leading firms of defence practitioners in the country.

Kevin’s criminal law caseload profile has been extensive including challenges to the House Of Lords including ” Z” v Crown  (interpretation of terrorism legislation), R v Ciaran Kearney (Stormont Gate – an alleged spying – case which collapsed the then fledgling Executive), Larry ‘The Chef’ Zeitcheck (The Castlereagh – break in), Stan Mallon (former chairman of the Ulster-Scots Agency: a challenge to extradition regarding alleged sex offences) and Sean Quinn (defence to contempt of court proceedings in the Dublin High Court). Kevin has also assisted in the defence in Al-Megrahi (The Lockerbie Bombing), the family of Madeline McCann (assisting on DNA issues arising from failed police investigations) and R v Mary Small (the biggest multi-million pound VAT fraud prosecution ever initiated in this jurisdiction).

Kevin has also been at the cutting edge of niche criminal appeal work and has been regularly instructed in high profile appeal cases including Hazel Stewart (double murder appeal proceedings), Karen Walsh (appeal against murder conviction) and historic miscarriage of justice cases including John Boyle  (miscarriage conviction for murder), Terry Laverty (40 year conviction arising out of Ballymurphy Massacre 1971 resulting in the British army killing of his brother in 1972 overturned in 2015), James Martin and Others (1991 convictions overturned following revelations about use of state agents), and  Angeline Mitchell (achieving a retrial on a murder conviction).

Kevin’s proven track record in judicial review applications has resulted in his Chambers and Partners Law Directory ranking in public and administrative law. His cases have embraced prisoner rights; the right to march; political and sex discrimination together and other equality issues.

A new political climate in the jurisdiction following the Belfast/Good Friday Agreement 1998 has brought new challenges resulting in the deployment of Kevin’s skills set to a wider range of human rights issues. Not the least of which has been Conflict related Legacy litigation on behalf of the families of the victims and the survivors from across the community including former members of the security forces. The KRW LAW LLP Legacy Litigation Department is unique in this respect and its work on behalf of victims of survivors is informing engagement with other post-conflict transitional justice jurisdictions.

In particular this form of litigation being undertaken by Kevin and his colleagues challenges the failures of the British government to discharge its obligations following breaches of the right to life during the Conflict. Kevin has pioneered the use of bespoke Conflict related Legacy litigation strategies to address the ongoing truth recovery deficit for many bereaved families across the religious and political divide and to call the British government to account for its failure to undertake independent investigations into the human rights violations suffered during the conflict. The range and breadth of instructions is testimony to his status as a leading advocate of an apolitical approach to what remains a serious human rights deficiency.

In addition to judicial review applications, Kevin is using civil litigation against state agencies to secure the discovery of information for clients and findings of tortious liability on the part of those agents of state responsible for causing or failing to prevent human rights violations throughout the Conflict.

More recently Kevin has spearheaded diversification into challenging areas of defamation and reputational management work. He is now recognised as a ‘go-to advisor’ in high profile cases touching upon this rapidly expanding area. Recent engagements in this field include: Michaela McCollum (convicted of drugs smuggling in Peru and her application for repatriation from Peru to Ireland), Sean Dunne (former Irish billionaire property developer challenging judicial bias and his application to the Irish Supreme Court to set aside earlier High Court rulings), Bernadette McAlliskey (human rights activist and formerly youngest MP in Parliament and the numerous media issues around her), Ricky Barklie (Chelsea football supporter accused of racism on the Paris Metro), George Galloway (former Respect MP and his high court challenge to Google on internet content), the case of CG (convicted sex offender identified on internet and his successful application for damages and injunction in breach of Article 2).

Kevin is a visiting speaker at the Institute of Professional Legal Studies (IPLS) of Queen’s University Belfast, focusing on the management of a legal aid practice in fiscally straightened times; he is regularly requested to address human rights forum including in the USA having been nominated by the New York Senate for his contribution to human rights work and more recently finds time from his busy schedule to assist as a legal advisor to the makers of BBC television drama series The Fall.