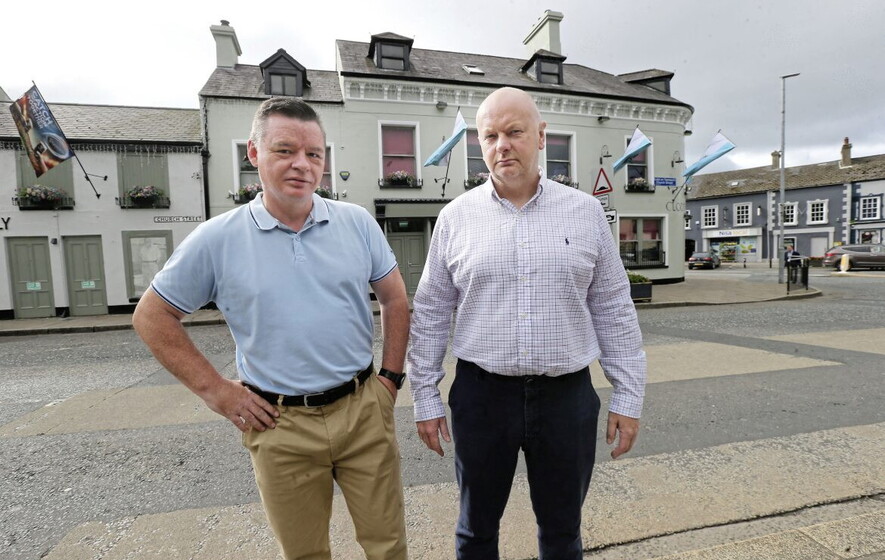 A MILLIONAIRE businessman shot as a teenager by an IRA unit that included a British agent has revealed how the paramilitary group later apologised after an inquiry.

Gerard Tinnelly was 18 when he was shot twice in a so-called punishment attack by a gang that included the military agent known by the cover name Kevin Fulton.

Gerard’s cousin and lifelong friend Charles Tinnelly, who was 17 at the time, was also shot in the right leg during the attack in Rostrevor in June 1990.

The pair were targeted as they left a bar in the Co Down village after watching the Republic play Holland in the World Cup.

The British agent, whose real name is Peter Keeley, infiltrated the IRA on behalf of the British army’s Force Research Unit and has been implicated various activities including murder in the south Down area.

In a book written under the name Kevin Fulton, Keeley recalled details of a ‘punishment’ attack believed to be the one in which the cousins were shot and confirmed he was present.

However, it has now emerged that a second IRA informer may also have been involved with the five-man team that shot the Tinnelly cousins, changing their lives forever.

Suspicions about the second agent have emerged in recent years.

For the past three decades the Tinnelly cousins have struggled with the stigma, along with the mental and physical scars of the attack, which was never fully explained.

Speaking about the shootings for the first time Gerard revealed how he suffered a wound to each leg and required emergency surgery, which lasted 13 hours, and resulted in 90 stitches being inserted.

He spent six weeks in hospital after an artery was torn and later found out that doctors wanted to amputate one of his legs but his parents refused them permission.

Charles has also now broken his silence about the shooting and the impact it had on him.

Although the wounds suffered by the teenagers were inflicted by handguns, three members of the IRA unit were also armed with deadly AK47 assault rifles – a high velocity weapon normally not used during ‘punishment’ shootings.

The men explain their wider family is typical of many in the south Down area and contains members who would describe themselves as both nationalist and republican.

Charles’s father Paul was shot dead in an Official IRA feud in June 1974 and other members of the extended family have served prison time while Gerard’s father, also called Gerard, was a founding member of the SDLP in the Rostrevor area.

The double shooting caused a deep rift within sections of the republican community in south Down, the impact of which has rippled through the decades to this day.

Despite suffering serious injuries Gerard went on to establish Tinnelly Construction and is one of the most successful businessmen in the border region.

As both men sit in the garden of Gerard’s home, Rostrevor House, a spectacular hillside pile, vivid memories about the night they were attacked flood back.

Gerard said that while a statement later appeared in An Phoblacht/Republican News – which referenced anti-social behaviour – the victims were never provided with an explanation as to why they were shot.

In the months and years that followed members of the extended Tinnelly family regularly came into conflict with some republicans in the south Down area.

He said that while there was sympathy for the family in the Rostrevor area there was “a lot of resentment towards us outside the village”.

“There were incidents between 1990 – 1994 where there would have been trouble between ourselves and those who aligned themselves to some of the people who shot us,” he said.

Charles said the four years between the shooting and subsequent inquiry and apology were difficult.

“All that intimidation was to silence us,” he said.

“There were a lot of lies being told to justify the shootings.”

Gerard revealed that he still struggles to come to terms with what happened him.

“It had a massive impact on me,” he said,

“It took me a long time and I am still not over it.”

He tells of how he devoted himself to building his construction business.

“I have pushed myself to get the business I have,” he said.

He adds that one of his biggest regrets was the impact of the episode on the wider Tinnelly family and in particular his parents Philomena and Gerard, who have both since died.

Charles said the incident had a “psychological effect” on him while the role of British agent Keeley – and the suspected involvement of a second agent – adds to a “great sense of injustice”.

“I didn’t do anything to deserve it,” he said.

Glancing at his cousin Gerard goes even further.

He explained that several of the incidents the cousins were linked with by local republicans to justify their shooting actually took place after the pair were targeted.

He suggests that while some republicans continued to demonise the pair, others were privately appalled at their treatment.

After several years senior IRA figures eventually agreed to examine the circumstances of the double attack after concerns about the incident were raised by sympathetic local republicans and relatives.

It has now emerged that the IRA held an inquiry into the shooting before the 1994 ceasefire and later apologised to relatives of the victims.

However, both men were sworn to secrecy and details have never been made public until now.

Gerard recalls how he was asked to meet senior republicans in Dublin on three occasions before the inquiry took place and was quizzed on his version of what happened.

In a fascinating insight he reveals how, accompanied by his father, he was asked to attended an address in north Co Louth to give evidence to a panel of IRA representatives.

During the meeting he came face to face with some of those who shot him as they presented their own account.

After the inquiry his father and a close relative of Charles were asked to attend another meeting during which the IRA apologised for shooting the two teenagers.

Gerard reveals that one of those involved was later expelled from the IRA while another has subsequently apologised to him in person.

In the decades prior to the shootings the republican movement had enjoyed some support around Rostrevor and it is believed it was planning to reorganise in the area.

Gerard now believes his shooting was designed to “sow discord and dissent” in the close-knit nationalist and republican community.

“Because if we as nationalist communities were fighting with ourselves, we were not fighting the British,” he said.

He believes the involvement of up to two British agents in the gun attack supports his view.

Of the IRA apology he said he welcomed “that eventually they recognised what was done was wrong”.

“And at that stage I didn’t know anything about the British being involved in any of this,” he added.

Charles said he felt “vindicated” by the apology.

In recent weeks both men have launched court action against the PSNI chief constable and Ministry of Defence while Keeley is named in legal papers.

“I want the truth to come out, I want justice,” Gerard said.

“It’s not about the money for me, it’s about the truth.”

He said the decision to go public was a difficult one.

“We are a very private family and have worked very hard for what we have got and try to keep a low profile,” he said.

“We have talked about this at length and feel this is the time to tell the truth and expose the truth rather than history being written by someone else and my children being told something that is not true.”

Charles’s brother Conor added: “We did nothing publicly because of other people within our family, there’s just too much hurt, they just can’t cope.”

Gerard’s brother, independent Newry and Mourne councillor Jarlath Tinnelly, has held a seat in the Rostrevor area since 2014 and topped the poll in 2019.

He said that between the date of the shooting and 1994 “it was a tough time for us collectively”.

He added that his father also received threats from members of the IRA unit who shot his son in the years before the apology.

“My late father was told the streets of the village would run red with our blood and there would not be any of us left – that worked out well for them,” he said.

The men’s solicitor Kevin Winters, of KRW Law, said the case “serves to expose the hand of the state”.

“The appalling attack on the Tinnellys 30 years ago was a contrived set up to serve a wider intelligence agenda.

“It was planned to foment internal strife and division in the republican movement in south Down.”

Mr Winters praised the stand taken by his clients.

“I commend the Tinnellys brave decision to bring this action,” he said.

“It will go a long way to forcing an apology from the state to add to the one given to the family in 1994.”

Gerard Tinnelly’s rise from teenage shooting victim to one of the most successful businessmen in the border region has been spectacular.

For more than three decades the 50-year-old has built a construction empire from his home village in Rostrevor, Co Down.

From a large and well-known family, he followed his grandfather John Tinnelly, who ran a block making business, into the construction trade.

His business interests stretch across Ireland and Britain, covering the both the residential and commercial sectors.

Despite his success the father-of-five has remained in the village where he grew up and over the years has bought up several of the district’s landmark buildings.

In 2018 he also acquired an historic estate and country house in his home village.

Built in 1836, Rostrevor House, was formally owned by Norbrook Group founder Eddie Haughey, who died in a helicopter crash in 2014.

It was reported at the time that around £1.3m was paid for the spectacular hillside pile and 29 acres overlooking Carlingford Lough and the Cooley Mountains in nearby Co Louth.

The 14-bedroom property is an ancestral home of the once influential Ross family, around which the picturesque seaside village of Rostrevor grew up.

Mr Tinnelly has spent the last four years renovating the property and recently moved in with his family.