Today, Tuesday 20th October 2015, Ibrahim Halawa’s lawyers are addressing the European Parliament in Brussels on his plight and calling on the European authorities to act with diligence in securing Ibrahim’s immediate release. The event is organized by Lynn Boylan MEP whom has consistently been campaigning for Ibrahim’s release, and whom earlier this year visited Ibrahim in his Cairo prison with his legal team.

Reprieve, a human rights organisation based in London which specialises in death penalty and torture cases will also address the Parliament on why Ibrahim’s case is of international concern, and why he should be released without further delay.

Irish citizen Ibrahim Halawa was caught up in the turmoil of political protests whilst on holiday Egypt in 2013. He was arrested by security forces near Cairo’s Ramses square in August 2013, two days after they had carried out what Human Rights Watch has condemned as “one of the world’s largest mass killings of demonstrators in a single day in recent history.” He was arrested along with his three older sisters. At the time of his arrest, he was just seventeen years old, and about to start his final year of school. The teenager’s case file contains no evidence to link him to any of the crimes he is alleged to have committed. It gives no reason, other than his presence at the mosque, to arrest him at all. He has however been held without trial for over 2 years. He is awaiting a mass trial, as one of a group of 494 defendants, charged with crimes that carry life imprisonment or the death penalty. During Ibrahim’s detention he has been denied adequate access to his lawyers (both his local and international lawyers). His trial has been subject to repeated delays and he has had no meaningful way to challenge his detention.

In the two years since his arrest Ibrahim has been severely mistreated. There are persistent and credible allegations that he has been denied treatment for a gunshot wound to his hand (sustained when gunfire was used, entirely unnecessarily, during his arrest); that he has been stripped naked and whipped with metal chains; that he has suffered routine verbal taunts about being executed – all at the hands of the prison officers supposedly responsible for his welfare. Amnesty International report that such physical and mental mistreatment of prisoners has become widespread in Egypt.

In addition Australian journalist Peter Greste, who was similarly detained, together with his lawyer Dr Christopher Ward SC instructed by Chris Flynn of Gilbert Tobin Lawyers, Sydney, will be addressing MEPs. Further, Mohammed Soltan who was in hunger strike for a year in an Egyptian prison before being deported to the USA, which also MEPs. Both Soltan, an American Citizen and Greste, an Australian Citizen, availed of the Egyptian Law granting their release when international diplomatic and legal pressure was put on the Egyptian Authorities.

There will be meeting with the Irish MEPs followed by a Press Conference and then a full briefing for MEPs into two sessions on the plight of Ibrahim Halawa.

“We as a family have decided that in order to secure Ibrahim’s release we must raise the case at the highest possible level. Earlier this year we petitioned the UN, and tomorrow we fly to Brussels to address the European Parliament with our lawyers. We are extremely grateful to Lynn Boylan for organising the event. We have seen how the efforts of the EU helped in the case of Al-Jazeera Journalists and we believe that with wider EU support, Ibrahim’s release can be secured.”

“The opportunity to address MEPs on the plight of Irish citizen Ibrahim Halawa, facilitated by Lynn Boylan MPE, together with our counsel from Doughty Street Chambers and other legal representatives and journalists, should be sending a clear message to the authorities in Cairo that the EU is taking very seriously the plight of an EU citizen and cannot ignore the consequences of its actions. We shall continue to seek Ibrahim’s immediate release and this opportunity in Brussels is part of that campaign.”

“We need to make MEPs aware of the plight of Irish teenager Ibrahim Halawa who remains in an Egyptian prison awaiting trial at a point yet to be determined the Egyptian authorities. Not only is Ibrahim an Irish national he is also a citizen of the EU with the rights that that confers on him. We have a strong legal team with our colleagues from Doughty Street Chambers, support from our colleagues at REPRIEVE and journalists who have similarly suffered the loss of liberty at the hands of the Egyptian authorities.” 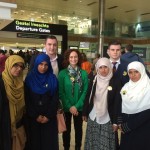 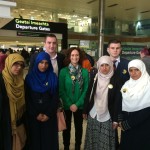 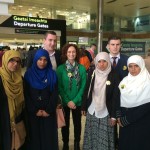