THE GUILDFORD PUB BOMBINGS 1974: NO LEGAL AID FOR INQUEST 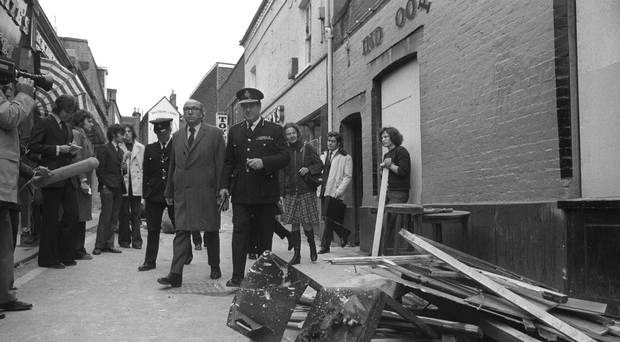 THE GUILDFORD PUB BOMBINGS 1974: NO LEGAL AID FOR INQUEST

KRW LAW LLP represent the family of Ann Hamilton, one of the victims of The Guildford Pub Bombings 1974. KRW also represent Yvonne Tagg, a survivor of the bombings. Ann Hamilton and Yvonne Tagg were both serving in the British Army.

There has been no prosecution of those responsible for the bombings to date and no independent human rights compliant investigation into the bombings.

Once again, a family in England who suffered loss because of the Conflict in Northern Ireland, are denied legal support in this complex investigation, having been excluded from any prior inquiry since 1974.

You will recall the recent battle for legal aid that the families of the victims of The Birmingham Pub Bombings 1974 had to endure to secure legal representation in the recent Birmingham inquest, following four years of pro bonorepresentation by KRW and counsel on their behalf.

“Again, a family have been excluded from effectively participating into the inquest into the death of their loved one whilst the state agencies – the police, the MOD – have legal representation at tax payers expenses. This will be a long and complex process of investigation. We will make representations to both the Lord Chancellor and the Home Secretary but unless the matter of public funding can be resolved or reformed then the family of Ann Hamilton will not be able to engage with this process, which will be a further injustice.”

“Our firm cannot sustain pro bonoassistance in this matter following our commitment to the Birmingham families. We have got to the stage of assisting the family of Ann Hamilton and Yvonne Tagg and through our representations we have secured the resumption of The Guildford Pub Bombings 1974 inquest. There is now a long process of disclosure of material and determining the scope of this investigation. Without our continued support our clients will not be able to engage in this process and will be, once again effectively excluded.”

“We are also aware of the importance of The Guildford Pub Bombing 1974 inquest to the remaining members of The Guildford Four and their families, including our client Bridie Brennan, the niece of Gerry Conlon. The inquest will be a travesty without enabling all victims to effectively participate with the benefit of effective and independent legal representation”.